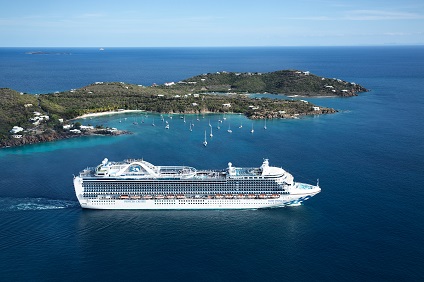 Caribbean Princess is the Grand Daddy of the Princess fleet, with the largest carrying capacity. This ship's 900 balcony staterooms and an entire deck of Mini-Suites offer impressive private vistas. Hallmark features include Movies Under the Stars®, the premier Lotus Spa and numerous formal and casual eating options, including the open-kitchen-style Cafe Caribe.

Caribbean Princess has everything you need to enjoy an unforgettable vacation.

Ft. Lauderdale, Florida
According to the popular 1960 beach movie, Fort Lauderdale is "where the boys are." The city's reputation as America's Spring Break capital, however, has been replaced with the more favorable image of a prime family tourist destination, attracting more than 10 million visitors annually. The most popular beach resort in Florida is even more rightly famed as the "Yachting Capital of the World," with more than 40,000 registered crafts calling its waters home. The city also prides itself on being the "Venice of America" with more than 300 miles of navigable waterways. Fort Lauderdale boasts world-class theaters, museums, sightseeing, and shopping.
The city sits 24 miles north of Miami and is named after a series of forts built by the United States during the second Seminole War. The forts took their name from Major William Lauderdale, who was the commander of the detachment of soldiers who built the first fort. Look hard and you might find remnants of three of them today. More people seem to be interested in taking a water tour aboard the "Carrie B."

Princess Cays
Join us at our exclusive port of call, Princess Cays, where you'll enjoy a private beach party on the island of Eleuthera in the Bahamas. One hundred miles long and only two miles wide, Eleuthera offers unspoiled beaches. Our private resort at Princess Cays is situated on more than 40 acres and features over a half-mile of white-sand shoreline, all at the southern tip of the island. The resort boasts outstanding amenities while carefully preserving this natural paradise. Take in the views from the observation tower. Enjoy a complimentary beach barbecue. Sip a cool drink or browse the shops and the local craft market. All of Princess Cays' facilities are linked by walkways. Recreational activities abound. Enjoy volleyball and a full range of water sports, or simply relax on the beach.

Grand Turk
Grand Turk, the capital of the Turks and Caicos Islands, is a small island bursting with turn-of-the-century Caribbean charm, retaining the look and feel of the Caribbean 40 years ago. Grand Turk was founded by Bermudan salt rakers some three centuries ago and its Bermudan-British-colonial architecture surrounded by colorful local dwellings make the island a treasure to visit. It is recognized as being one of the first places in the New World where Christopher Columbus landed and also gained worldwide attention when John Glenn splashed down near Grand Turk on his historic first mission to space. Grand Turk is six miles long and just over a mile wide with a population of only 6,000. It is blessed with miles of uncrowded, beautiful beaches and is close to several uninhabited cays such as Gibb's Cay, home of the stingray encounter. While there are many landside attractions to explore such as the Old Prison, Lighthouse Park, and the re-created salt salina, the real beauty of the island lies underwater. Grand Turk is world-famous for its healthy and beautiful coral reefs that surround the island, stretching almost from the coastline to the 7,000-foot vertical wall just offshore.

Roatan
Roatan, the largest of the Bay Islands of Honduras, is noted for its pristine coral reefs, beautiful beaches, lush tropical foliage, and friendly people. Christopher Columbus discovered the islands in 1502 while on his fourth voyage and over the years it has been controlled by both the British and Spanish, as well as pirates and traders. The first permanent population of Roatan originated from the Cayman Islands, arriving in the 1830s shortly after the end of slavery in British colonies. Today, the population is about 30,000. The main town and capital of the municipality is Coxen Hole. Roatan is a long, narrow island measuring 37 miles in length, located about 30 miles from the northern Honduran mainland. The island has a mountainous backbone that provides for some excellent hiking opportunities, panoramas and lush scenery. Surrounded by warm Caribbean waters, this hilly island (frequented by diving enthusiasts) is picturesque, unspoiled and can take claim to being one of the region's fastest developing destinations.

Cozumel
Mayan myth claims that Cozumel was home to the gods. Truly Cozumel is a place fit for the gods, with its dazzling white-sand beaches, ruined Mayan temples, exotic jungle wildlife, and crystalline waters teeming with tropical fish. Just offshore lay Palancar Reef, considered one of the most spectacular coral formations in all the Caribbean. Of course, the gods weren't the only individuals attracted to this terrestrial paradise: during its long and colorful history, Cozumel has been home to pirates, buccaneers, and freebooters, including Sir Henry Morgan and Jean Lafitte. Today's traveler will discover the same ravishing beauty and relaxation that entertained gods and pirates alike.