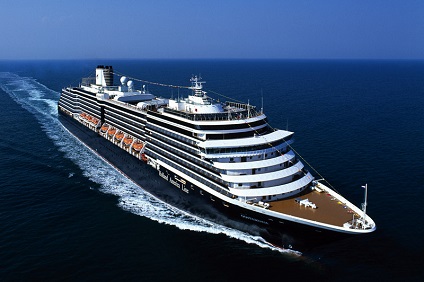 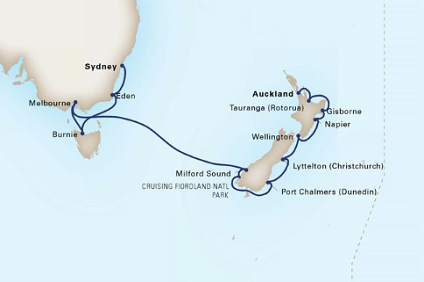 15 Night Cruise sailing from Sydney to Auckland onboard Oosterdam.

Sydney, Australia
If you want a snapshot of Australia's appeal, look no further than Sydney: The idyllic lifestyle, friendly locals and drop-dead natural beauty of this approachable metropolis and its attractions explain why the country tops so many travelers' wish lists. But Sydney is more than just the embodiment of classic antipodean cool—the city is in a constant state of evolution. A list of what to do in Sydney might start with the white-hot nightlife, with its new cocktail bars and idiosyncratic mixology dens. Inventive restaurants helmed by high-caliber chefs are dishing up everything from posh pan-Asian to Argentine street food, while the famous dining temples that put Sydney on the gastronomic map are still going strong too.

The famed harbor is among the top sights—home to twin icons the Sydney Opera House and the Sydney Harbour Bridge, it is the stepping-off point for some of the city's best cultural attractions and sightseeing. In one day you can sail around the harbor, get a behind-the-scenes tour of the opera house and climb the bridge, with time to spare for people-watching over a flat white at a waterfront café.

Speaking of water, when you plan what to do in Sydney, you will want to include the iconic beaches, where surfers, office workers and tourists alike converge on some of the most gorgeous shoreline scenery anywhere. Bondi, Bronte and Clovelly are all within easy reach of the Central Business District, as is Manly, a charming seaside town located a short ferry ride from Circular Quay. Beyond the city you'll discover UNESCO World Heritage Sites and the chance to encounter Australia's cuddliest wildlife—a perfect way to round out your envy-inducing Sydney photo collection.

Eden, New South Wales, Australia
Straddling national parkland and sparkling estuaries on the unspoiled Sapphire Coast of New South Wales just an hour north of the Victoria border, Eden lives up to its name. From secluded beaches and striped red cliffs to the emerald waters of Twofold Bay—the third-deepest natural harbor in the world—the town is an inspiring immersion into wilderness, even if you just have one day. The original settlers thought so too, establishing a thriving baleen-whale-hunting industry that was assisted by pods of local orcas. Visitors can learn about this amazing mammalian partnership at the Eden Killer Whale Museum, and can learn about some of the shipwrecks at the Green Cape Lightstation. Outdoor enthusiasts have ample opportunities for swimming, hiking, snorkeling and spotting humpback and southern right whales (between May and November; unfortunately, orcas no longer call the area home). And when you think all is said and done, there’s still native wildlife to meet and local art to appreciate—not to mention some of the country’s most prized oysters just waiting to be plucked from the sea.

Burnie, Tasmania, Australia
Burnie’s long-running logging industry is just one hint at the amazing forests that surround the town, from the UNESCO World Heritage area that contains Tasmania’s most famous crag—Cradle Mountain—to the lesser-known rain forests of the Tarkine wilderness. Woodworkers, papermakers and print artists thrive in this misty land of trees, as does rare wildlife, ranging from wedge-tailed eagles to echidnas and the fabled Tasmanian devils. There’s pristine beachfront, too, where little penguins march and well-to-do locals dine on seafood platters as they gaze off into Bass Strait. Tasmania's separation from mainland Australia has created a resourceful, self-reliant and sometimes rebellious community that cooks and farms as well as it crafts and explores. Burnie's bounty includes award-winning single-malt whiskeys, hard apple cider, trout and salmon, hormone-free milk and cheeses and beef from Cape Grim in the far northwest. Known for having the world’s cleanest air, Burnie is an exciting base for a taste tour as well as a rugged or refined adventure.

Melbourne, Australia
Melbourne is consistently voted one of the world's most livable cities—and for good reason. This is Australia’s cosmopolitan heart with cutting-edge art and architecture, historic galleries, attractions and museums, plus a dizzying range of restaurants, bistros, markets and bars. It's renowned for its sporting culture, home to the esteemed Melbourne Cricket Ground and Australian rules football teams.

The famous laneways of Melbourne bustle with hidden bars and eateries, while myriad beaches and parks allow for the ultimate outdoor lifestyle and active things to do. It’s a melting pot of cultures and a city of gourmands who demand excellent food and find it everywhere—from modern Australian cuisine and delicious Asian fusion fare to low-key cafés serving the best coffee you’ve ever tasted.

If you want to leave the city, Melbourne is the gateway to Victoria's world-class wineries and spectacular coastline sights. Visit the famous penguins at nearby Phillip Island or feast on local produce in the picture-perfect Yarra Valley. Wherever you go in and around Melbourne, you’ll be sure to understand why so many choose to call this beautiful corner of the world home.

Milford Sound, New Zealand
Milford Sound, or Piopiotahi (its name in Maori), sits on the west coast of New Zealand's South Island and was first called the Eighth Wonder of the World by none other than Rudyard Kipling, who had seen some pretty wonderful places. As you sail up the 15-kilometer-long (nine-mile-long) sound, with soaring snow-topped peaks looming above—the tallest reaches an altitude of 1,517 meters (4,977 feet)—you'll understand Kipling's enthusiasm.

Although it is called a sound, it is technically a fjord—a narrow inlet created by glacial erosion over thousands of years. While its geological history is long, its human history is not. It is believed that the Maori first explored the sound, and the rest of the area that is now part of Fiordland National Park, around 1,000 years ago; Captain Cook followed in 1770. But neither Maori nor Europeans created permanent settlements of any significance, and the land was pristine when Fiordland National Park, New Zealand's largest national park, was established in 1952. While many walking trails cross the park, the most breathtaking views are arguably those from the water, with the sheer rock faces looming above your ship as you sail through this majestic landscape.

Wellington, New Zealand
New Zealand's cool little capital is located at the southern tip of the North Island, meaning it's blessed with a beautiful waterfront, fresh seafood and unpredictable weather. So famously tempestuous is Windy Welly that visitors quickly learn not to go outside without an umbrella and will spend more time than usual talking about the weather. Politics is a hot topic too, with government workers buzzing about the Beehive, as the distinctive Parliament building is colloquially known.

Wellington is also known for culture and cuisine. Learn about Maori history and Kiwiana at Te Papa, the national museum; go behind the scenes of the Lord of the Rings movies made in Wellywood; and wash down a plate of chilled bluff oysters with a crisp sauvignon blanc at a Cuba Street restaurant.

Napier, New Zealand
The Southern Hemisphere's answer to Miami Beach—at least when it comes to Art Deco architecture—Napier has a perfect mix of natural and manmade beauty. The historic district, which was mostly constructed in the 1930s after a massive earthquake and subsequent fires destroyed the city in 1931, was named a UNESCO World Heritage Site in 2007. As a delicious bonus, there's a thriving food and wine scene, too. Surrounded by the rolling vineyards of the Hawke's Bay wine region and edged by pristine waters, Napier has attracted a host of culinary innovators that has put it on the foodie map over the past two decades. Nature lovers, too, are drawn by this North Island city's scenic splendor and abundant wildlife. Down the coast, colonies of Australasian gannets thrive at Cape Kidnappers. Within the city, Norfolk Island pines line the seafront Marine Parade, a half dozen parks and gardens bloom from September to March (spring and summer Down Under), there are forested hiking trails and active pursuits range from cycling to golf. It's easy to enjoy yourself while soaking up Hawke's Bay's spectacular landscape.

Auckland, New Zealand
New Zealand's biggest city deserves more than a layover. Auckland is multicultural and cosmopolitan, with sizeable Polynesian, Asian and Maori populations enriching its history and broadening the palate. Internationally known chefs and fashion designers have made neighborhoods like Ponsonby, Newmarket and Parnell world-class destinations for shopping and dining.

You're never far from water attractions in New Zealand—and this is especially true in Auckland where it's not unheard of for downtown workers to go kayaking on their lunch break. The once-gritty port has been transformed into inviting public spaces and buzzing nightclubs, with sailboat charters and regular ferry connections waiting to whisk visitors around the harbor for sightseeing.