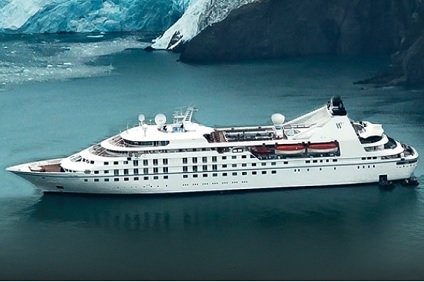 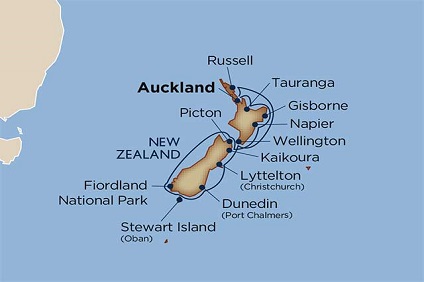 Your adventure begins in Auckland. Stake out must-sees from 1,076-feet in the air at Sky Tower. Enter the yachters’ beloved Mercury Bay to explore beautiful beaches or try game fishing. An overnight in Wellington offers a chance to explore the Te Papa Maori cultural museum, gorgeous beaches, and a waterfront promenade. In Christchurch, visit Hagley Park Botanic Gardens and punt on the Avon River. Stroll Baldwin Street in Dunedin, designated a UNESCO City of Literature. On Stewart Island, see parakeets, tui and kiwi birds, and paddle picturesque bays. Freycinet National Park boasts pink granite peaks, iconic Wineglass Bay, and beautiful black swans. Spend a relaxing day at sea on the way to Picton, where fantastic hiking, biking and the exceptional sauvignon blancs of the Marlborough Region await. In Kaikoura, witness sperm whales, fur seals, and dolphins, and try local crayfish. New Zealand is teeming with sheep; find some of the country’s most beautiful Merino wool creations in Napier. Unveil the underlying Maori culture in Gisborne, and walk the wine trail. Tauranga’s sparkling harbor and blue skies welcome you to the home of The Hobbit and leave a lasting impression before your voyage concludes in Auckland.

Auckland, New Zealand
The first thing to notice when you see Auckland is the 1,076-foot-high Sky Tower, the tallest free-standing structure in the Southern Hemisphere offering amazing panoramic views. The area was settled by the Maori around 1350 and was settled by Europeans in the early 1800s. The land here is rich and fertile and the economy is good. Take a ferry to Waiheke Island, known for its beaches, forests, vineyards and olive groves or stroll along Ponsonby Street known for arts, cafes, culture and historic villas.

Russell New Zealand
One of New Zealand’s most popular destinations, Russell was New Zealand’s first seaport and first European settlement. A stroll around town will show you New Zealand’s oldest Roman Catholic building from 1841, known as Pompallier, and Christ Church, the oldest existing church there. Russell is also the gateway to the Bay of Islands.

Wellington, New Zealand
The inviting compact capital of New Zealand has a waterfront promenade, sandy beaches, an interesting working harbor and colorful wood houses in the surrounding hills. Strong winds frequently through the strait here have given it the nickname “Windy Wellington.” Work in a visit to Te Papa, an interactive and innovative national museum that showcases Maori culture, art heritage and the fascinating history of New Zealand.

Lyttlelton, (Christchurch), New Zealand
Established as a landing point for colonial settlers on their way to Christchurch, Lyttelton has been known as the “Gateway to Canterbury.” It is only 7 miles (11.8 km) from Christchurch. Take a double-decker bus in Christchurch to the Botanic Gardens, the International Antarctic Centre, Canterbury Museum or North Hagley Park. There are plenty of eclectic shops, cafes and bars on your way.

Dunedin (Port Chalmers), New Zealand History Building
A description of Dunedin would include its Scottish and Maori heritages, its Victorian and Edwardian architecture, its dramatic landscape that encourages hiking and cycling and a large student population. The nearby Otago Peninsula is home to colonies of albatross, sea lions and the rare yellow-eyed penguins. Dunedin has one of the world’s steepest streets – Baldwin Street and is a UNESCO designated City of Literature.

Oban, Stewart Island, New Zealand
The main settlement of Stewart Island is a haven for bird life like kaka, parakeets, tui and New Zealand’s national bird, the kiwi. Pleasantly located on a vista of picturesque bays and coves with lush vegetation, activities around Oban include hiking, sea kayaking, diving, or take one of New Zealand’s Great Walks to Maori Beach, the site of a 1913 lumber mill.

Scenic Cruising Fiordland National Park, New Zealand Doubtful Sound
Be out on deck to experience the beauty of Fiordland National Park, the largest of the 14 national parks in New Zealand. It is a major part of the Te Wahipounamu UNESCO site. Two rare bird species live here – the Takahe, thought to be extinct was found in the mountains here, and the Kakapo, the world’s only flightless parrot has refuge here as well.

Picton, New Zealand
Picton is the starting point for exploring the Marlborough region of New Zealand and their delicious sauvignon blanc wines. Tiny and picturesque, Picton is ideal for the naturalist or the foodie. Hike or bike along the 43-mile Queen Charlotte Track, explore the nearby wildlife sanctuaries, indulge your taste buds with refreshing white wine and taste the famous green-lipped mussels indigenous to Marlborough Sounds.

Kaikoura, New Zealand
Known for its abundant wildlife, Kaikoura is the place to go if you want to see sperm whales, New Zealand fur seals and dolphins who live year-round in the coastal waters here. The Kaikoura Peninsula Walkway will take you from the town center to impressive lookout points at Point Kean. Make sure to try a plate of their well-known crayfish and check out the Fyffe House and Museum, built on a whale bone foundation.

Napier, New Zealand
The small, charming and lively seaside resort of Napier is famous for its Art Deco architecture like the zigzag-patterned Daily Telegraph Building and the nearby fruit and Hawke’s Bay wine-growing region. It is the largest wool-exporting port in New Zealand with a lovely tree-lined waterfront promenade, home of the Pania of the Reef statue of a Maori maiden, the symbol of the city.

Gisborne, New Zealand
Known for its surf beaches, like Makorori or Midway, and wineries, the unofficial “Chardonnay Capital of New Zealand,” Gisborne has a delightful wine trail that leads to boutique wineries. Maori culture can be seen here at the Tairawhiti Museum, Titirangi Reserve and Te Pho-o-Rawiri. Gisborne is also known for some amazing food.

Tauranga, New Zealand
Beautiful Tauranga with its sparkling harbor, warm climate and blue skies is New Zealand’s fifth largest city and is known for the relaxed lifestyle there. Among the attractions is the Waitomo Glowworm Caves where a glowworm species exclusive to New Zealand can be found. This is also the home of The Hobbit on the movie set where many scenes from Lord of the Rings and The Hobbit were filmed.