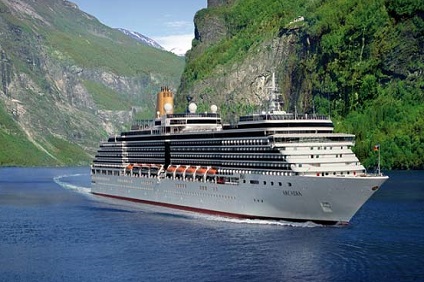 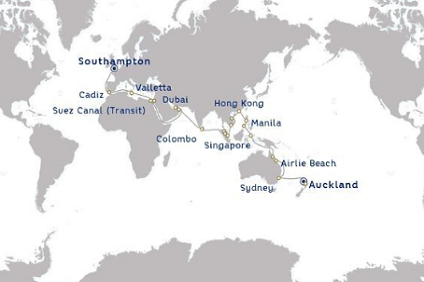 Exclusively for adults, Arcadia is a charming blend of classic and chic. She offers a relaxing and sociable atmosphere, exclusively for adults. Enjoy superb dining in Ocean Grill restaurant and Atul Kochhar’s Sindhu. Unwind in her large spa with thermal suite and hydrotherapy pool. Wander through the art gallery, or enjoy a show in the three-tiered theatre. Or simply lounge on deck with a chilled cocktail and a good book.

This ocean odyssey will take you to some of the world’s greatest cities, to some of the most spectacular sights on the planet, across every time zone, and to just about every continent. Along the way, you’ll discover paradise islands, ancient temples and monuments, breathtaking natural beauty and jaw-dropping world wonders. From the buzz of Sydney, to the welcome of New Zealand, the pulsating energy of Hong Kong and the sultry charms of Singapore, every call will open your eyes to the world as you’ve never seen it before.

Auckland, New Zealand
The Viaduct Harbour area now boasts outdoor restaurants ideally placed to view the hundreds of yachts attracted to this icon of sailing success. This 'City of Sails' is also home to New Zealand's impressive National Maritime Museum which charts the nation's seafaring history. Harbour ferries offer a great way of viewing the city, either by crossing the bay to old-established Devonport or under the harbour bridge to the suburb of Birkenhead. Otherwise cruises to Auckland take in all the sights from the revolving restaurant at the top of the Sky Tower, the tallest structure in the southern hemisphere at 328 metres. On Auckland cruises, shore excursions can take you to the remarkable geysers and mud pools of Rotorua.

Sydney, Australia
One of the world’s great cities and harbours, Sydney always lives up to great expectations. When you are on one of our Sydney cruises, the first glimpse of the Harbour Bridge and Opera House will stay in your memory forever.

Bitung, Indonesia
Lying on the north coast of the island of Sulawesi in Indonesia, Bitung is known for the incredibly vibrant, varied and often bizarre marine life that can be discovered on a muck dive in the Lembeh Strait, just off the shore.

Hong Kong, China
Hong Kong may boast some 236 islands but most of the five million inhabitants of this former British Crown Colony are concentrated on just one, Hong Kong Island, and one city, Kowloon, on the facing peninsula. It is known as one of the most crowded and vibrant places in the world, making Hong King cruises a must see.

Phu My, Vietnam
In amidst the swarming streets and markets of Ho Chi Minh City, stand numerous landmarks bound in history and tradition: from museums that tell the stories of war to ornamental pagodas that are filled with characters from Buddhist and Taoist religions, all of which can be seen while enjoying one of our cruises to Phu My. From Phu My, your cruise shore excursion leads you to the fascinating tunnel network at Cu Chi, used by the Viet Cong during the war. At their height they stretched from the South Vietnamese capital to the Cambodian border.

Singapore, Singapore
Cruises to Singapore have much to offer. The city’s glorious parks have earned it a reputation as the Garden City of the Far East but you will also be cruising into one of the world’s busiest ports.

Penang, Malaysia
Superbly laid out with some sumptuous exhibits, it portrays the rich history of the town and of the many and varied peoples and cultures which have played a part in its development: Malays, Chinese, Indian, British - even Armenians. This multi-cultural heritage makes it a fascinating place to walk around. The town centre, Georgetown, is full of interesting shops and lively markets (including a night bazaar) but, although it is also Malaysias top beach resort, there is no question about Penangs major attraction: the Snake Temple. This is full of still-poisonous reptiles but they are so sedated by the temple incense that they spend all their time dozing and are - they say - no danger to visitors. Look out, too, for the Key Lok Si, the largest and reputedly the finest Buddhist Temple in south east Asia.

Colombo, Sri Lanka
This is a warren of streets rich in mosques and Buddhist and Hindu temples and lined with shops selling everything from exquisitely worked gold jewellery (on Sea Street) to herbs for Ayurvedic treatments and bargain-priced CDs and cassettes (Malwatte Avenue). To the south of the city, you can enjoy lush scenery and watch a cricket match at the lovely seafront park of Galle Face Green, then enjoy a stylish afternoon tea at the historic Galle Face Hotel - after admiring the exquisite hand carved doors at its entrance.

Dubai, UAE
Known as the ‘Pearl of the Arabian Gulf’, Dubai is one of the seven emirates that comprises the United Arab Emirates. With a mix of traditional architecture and glittering modern buildings, Dubai is a place of fascinating contrasts that can best be described as the ‘Middle East meets Hong Kong with a little Las Vegas thrown in for style’. It is also the home of sand, sea and sun.

Aqaba, Jordan
But the main attraction of this area is the magnificent fortress city of Petra, buried by sand for more than 2,000 years until it was discovered in the desert near Aqaba in the 19th century and excavated in the 1950s. Originally built by Bedouin, the 'rose red' city of Petra is a genuine wonder of the world. Make a dramatic entrance by walking through the Siq (gorge) up to the imposing Treasury with its exquisite facade. Further on are temples, tombs and a huge theatre. Elsewhere, visit Wadi Rum, a vast silent landscape of sandstone mountains, desert and ancient bedrocks.

Suez Canal (transit), Egypt
As the ship goes through the Suez Canal, guests can be out on deck throughout the transit, as it is one of the world's most fascinating maritime experiences, creating the bizarre impression that they are sailing right through the dry heart of the desert. The present, 101-mile-long Canal took 15 years to build, was completed in 1869 and shaved a mere 7,000 miles off the journey from England to India. It is the second to cross the Isthmus of Suez - the first was constructed in the 5th century BC and was in use until the 8th century.

Cadiz, Spain
You cruise right into the heart of historic Cadiz as immediately across the busy Avenida del Puerto from the Spanish port is the main square and shopping area. From there, it is easy to find your own way around this compact city. Behind is the 18th century cathedral (El Nueva) and the view from the top is worth the long climb up its internal stairs.

Southampton, UK
The city center is a charming mix of old city walls and a large modern shopping centre. With multiple restaurants, museums, cinemas and theatres there is plenty to be explored.