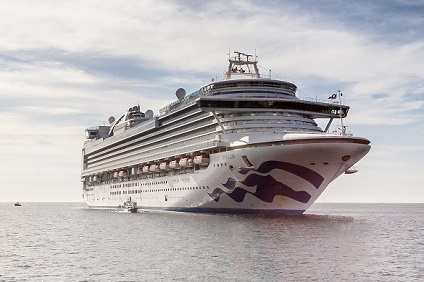 Ruby Princess is a luminous jewel on the seas and a romantic destination in itself. Christened by lovebirds Trista and Ryan Sutter of TV’s The Bachelorette, she offers nearly 900 balconies from which to view the world, an array of entertainment options including Movies Under the Stars®, and sumptuous dining choices from Crown Grill to the International Café.

Sydney
As your ship passes Harbour Heads, you are presented with the shimmering skyline of Sydney - hailed by many seafarers as "the most beautiful harbor in the world." Two prominent landmarks, Harbour Bridge and the sail-like curves of the Sydney Opera House, grace the backdrop of this picturesque harbor. There is a wealth of adventure waiting in Sydney - from its cosmopolitan city center to miles of beautiful beaches and the Blue Mountains.

Australia's oldest and largest city was born in 1788 with the arrival of the "First Fleet" transporting 760 British convicts. Today, Sydney is the largest port in the South Pacific and is often voted the most popular destination in the South Pacific.

Noumea
The capital of New Caledonia, Noumea is a little piece of France in the middle of the Pacific Ocean. Before World War II, New Caledonia was a little known and seldom-visited French possession known for its penal colony and its natural resources. (Nickel smelting still plays a major role in the island economy.) Today, travelers are drawn to New Caledonia for its scenic beauty. The island is famed for its white-sand beaches while its barrier reef is the world's second longest. The offshore waters also offer superb diving and snorkeling.

In 1774, James Cook thought the island's rugged hills resembled those of his native Scotland. Hence he christened the island New Caledonia. The island and its outlying groups became a French colony in 1854 and an overseas department of France in 1956.

Lautoka
The second-largest city of Fiji, Lautoka is located in the west, on the island of Viti Levu. It is nicknamed The Sugar City due to its expansive sugarcane plantations producing the island's most important crop. Its soft-sand beaches are fringed with swaying palm and coconut trees reflected in the crystalline turquoise waters. A drive through the city center allows glimpses of tree-lined streets, colonial houses, colorful markets and a vibrant local culture.

Lifou
The largest of the Loyalty Islands, Lifou lies some 118 miles to the northwest of New Caledonia. The island is an ancient makatea - a fossilized coral atoll raised high above sea level. Whalers were the first Westerners to visit this Melanesian paradise - though greedy traders lured by the island's aromatic sandalwood trees soon followed. Today's visitors are drawn attracted to the island's spectacular scenery, which ranges from dense tropical forest to dramatic cliffs towering above the crashing waves. Lifou's white-sand beaches are some of the finest to be found in the entire Pacific.

Lifou and the other Loyalty Islands are part of New Caledonia, which, like Tahiti, is an overseas province of France. The island is a center of traditional Melanesian culture.

Easo is an anchorage port. Guests transfer to shore via ship's tender.